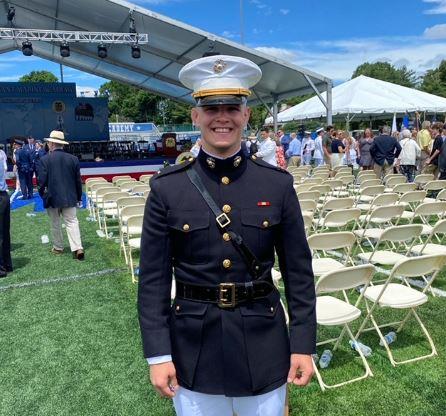 Luke Gauthier is a lifelong resident of Lacey Township.   He graduated from Lacey High School in 2018.  During his high school career, he was on the High Honor Roll and was a member of the STEM Academy all four years.  Luke was also a four-year varsity member of the wrestling team. During his junior and senior seasons, he was one of the captains of the team.  He finished 1st in the Shore Conference Tournament, 1st in the District tournament, 1st in the Region tournament, and was voted the Outstanding Wrestler of the tournament, and he placed 4th in the NJSIAA State Championships in Atlantic City.  He finished his career with 124 wins, third in Lacey High School history. He further volunteered at the Lacey Elks as a Junior Elk (“Antler”) and at the Lacey Youth Wrestling Program.

Luke graduated from USMMA on June 18, 2022 with a Bachelor of Science Degree in Marine Engineering.  He further was sworn in as an Officer in the United States Marine Corps, with the rank of 2nd Lieutenant.  Luke will fulfill his commitment of service on active duty in the United States Marine Corps.   On August 5, 2022, Luke will once again depart Lacey Township for Marine Corps Base Quantico in Virginia to begin The Basic School (TBS) training for six months.   Upon completion of TBS, Luke will travel to Pensacola, Florida to attend Air Flight School with the desire to become a Marine Corp Pilot.