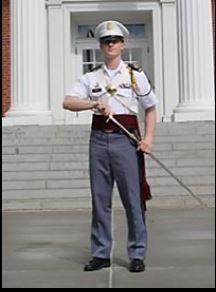 William Rapsas is a 2017 Lacey Township High School Graduate. During his high school career he was a 4-year, 3-season athlete running Cross Country, Winter Track, and Spring Track. He was also center snare for the Marching Band for 3 years starting in 8th grade, receiving 14 Varsity letters by the time he graduated. As a percussionist and jazz drummer, he was a member of the concert band as well as the Jazz band and Drama Club. William was a member of the National Honor Society and was elected president during his senior year. He achieved many accolades during his years at Lacey Township High School, including being named Unsung Hero and receiving the honor of Senior of the Month. He attained the rank of Eagle Scout in his junior year all while keeping a GPA above 3.5.

All these achievements and hard work he put forth helped to lay the groundwork for his pursuit in the military. William was awarded a National 4 year Army ROTC Scholarship to Norwich University Corps of Cadets in Vermont as well as the ID White Scholarship for 4 years. Norwich is a senior military academy and the birthplace of ROTC. William is contracted with the United States Army and took his oath at the start of his Freshmen year or “Rookdom” for those who are in the Corps of Cadets. William was recruited by the Corps of Cadets Cross Country Team and has been a varsity athlete these past 4 years. Upon completion of the first semester of his freshman year, he was presented with an opportunity to attend the US Army Airborne School.

This was an incredible achievement as these “slots” are rarely available, especially to freshmen. William attended the US Army Airborne School at Ft. Benning Georgia where he completed his training and 5 jumps successfully. Upon his graduation from Airborne School, during his pinning ceremony, William had the honor and privilege to receive his Jump Wings from a newly Commissioned 2nd Lieutenant and former Lacey Township High School Graduate, Keith Schemel, who was stationed there at that time.

During his sophomore year, William was presented once again with another opportunity from the Army to go to Romania for a program called CULP - Cultural Understanding Leadership Program. During the month-long stay, he joined many Cadets from various Army Military schools. He learned about their culture and did training with some of the Romanian Military Cadets. He received the Cadet Leadership Award as the top Cadet in his group. William was voted in by his peers to the Junior Ring Committee, which consists of 10 Cadets whose responsibility is to create and design a ring that is unique to their graduating class. Each class has a ring in their museum dating back to the beginning of this coveted symbol and William R. Rapsas is now forever listed with all the committees from years past.

Living the “Corps” life, as they call it, is very rigorous and requires great discipline. William maintains high honors academically and is a member of many organizations on campus. He is a member of NAB, Norwich Artillery Battery Unit and last year was their training Sergeant. He is also a member of their Ju-Jitsu Club and this year is Vice President. Now that he is in his senior year, he returned in August to attend Ft. Ethan Allen to do his officer training, returning as the Regimental Command Sergeant Major, the third highest ranking Cadet in the Corps of Cadets. William graduated with a Bachelor's degree in History with a minor in Political Science. He is also Commission as a 2nd Lieutenant in the United States Army.