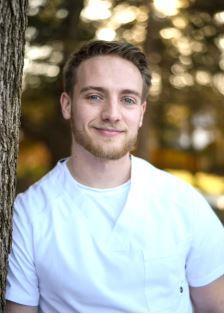 Vincent Cortese is a graduate of Lacey Township High School Class of 2016 and is a lifelong resident of Lacey Township. During his time in high school, he was inducted into the National Honor Society, was involved in various clubs, and played football under Coach Vircillo for four years. He was a Varsity starter for his junior and senior years as a defensive back and earned his Varsity letters. Vincent was a part of the Academic All-Shore Team during his football career and senior, Vincent received the football academic award and was also recognized in the Shore Conference as an academic football scholar.

While attending college, Vincent was hired by Hackensack Meridian Health and for the past two years has worked as a Patient Care Technician at Southern Ocean Medical Center in Manahawkin, New Jersey. In February of this year, Vincent passed the NCLEX Exam, earning the title of Registered Nurse in the State of New Jersey. He will begin his career as a nurse in the coming months and continue his education at Chamberlain University working towards his Bachelor of Science in Nursing degree. When not pursuing his educational goals or working, Vincent enjoys playing basketball, softball, golf and going to the gym.

Vincent would like to thank all of his teachers and coaches in the Lacey Township School District who have assisted and encouraged him to achieve his goals and aspirations. He knows that he would not be where he is today without their influence and support.