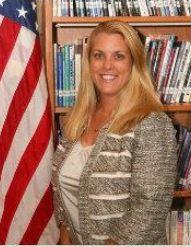 Jackie Ranuska, Principal of Cedar Creek Elementary School graduated from Lacey High School in 1988. She attended Lacey Schools from kindergarten through grade 12. She taught PE and Health in Edison for 2 years before returning to Lacey where she taught Health at the high school for 8 years. She became Dean of Students and then Vice Principal at the high school. Jackie then became Supervisor of Instruction at Cedar Creek in 2007. She has been the principal for 15 years. She also served briefly as the Interim Principal at the high school for a short time and assisted at Central Administration, as the Office of the Superintendent was changing. Mrs. Ranuska attended Old Dominion University and then Georgian Court University for her Master’s Degree.

Jackie’s family were all educators. Her mom taught in Lacey and her sister and dad were also administrators in other districts. She has a daughter that graduated from Lacey High School and also attended K-12, she works in New York City after graduating from Penn State.